What is DOT Drug Testing 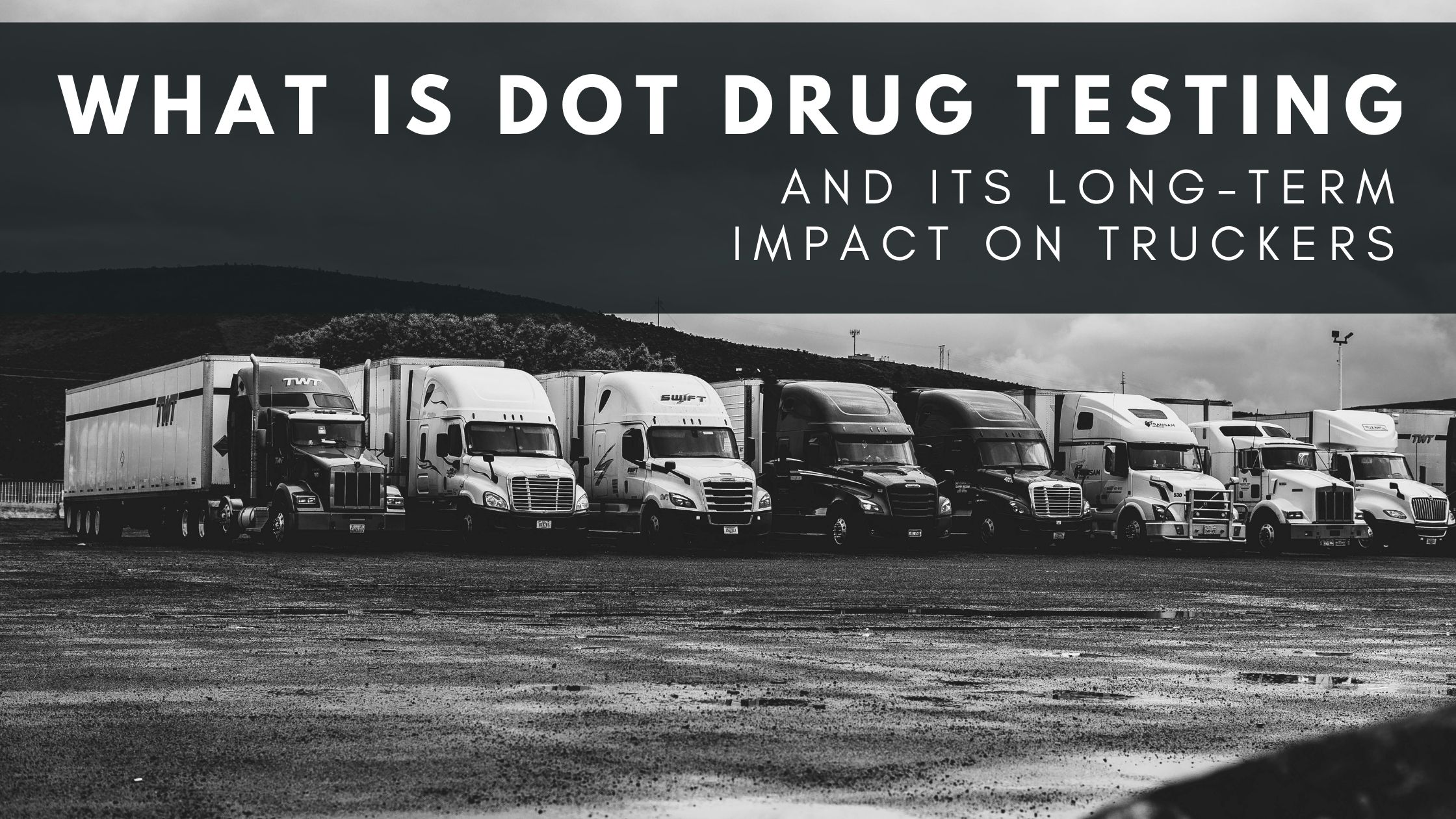 DOT drug testing is something that both truck drivers and people working for a logistics company need to be aware of. To help you understand the long-term impact DOT drug testing can have on truckers, keep reading as we explore everything you need to know about DOT drug testing.

What is DOT Drug Testing?

Before you can understand the impact that DOT drug testing might have on your career, it’s critical that you know what is DOT drug testing. DOT drug testing is a regulated type of drug testing which is overseen by the Department of Transportation (DOT). Back in 1991, the U.S. Congress recognized there was a need for drug and alcohol testing for anyone working in the transportation industry, both for the safety of workers themselves and anyone else using the roads. The DOT drug testing rules can be found in the Title 49 of the Code of Federal Regulations (CFR) Part 40, and any updates to the process will be reflected here.

Although you are likely learning about what is DOT drug testing for your work as a truck driver or within a company working with truckers, it’s important to note that these tests are used within a wide range of industries. Anyone working within the industry whose job is considered to be a safety-sensitive position may be tested, including flight crews, drivers that carry over 16 passengers, emergency response workers, train workers, and mechanics within the industry.

What Do DOT Drug Tests Look For?

When searching for drug and alcohol testing near me, you’ll find that every company uses the same 5-panel test. This test looks for cocaine, marijuana/THC, opioids, amphetamines, and phencyclidine. Although you’ll find that other industries may sample in a different way, DOT drug testing must take place using urine samples. When testing your employees as a business owner, ensure you are always finding a company that understands what is DOT drug testing and the type of test that you should be using.

When are DOT Drug Tests Needed?

To fully understand the impact that DOT drug testing could have on your career as a trucker, it’s important to know when and where you could be asked to take one of these tests. These are a few of the common reasons that you would be required to undertake a DOT drug test:

·       Reasonable suspicion – If a trained supervisor believes you might be under the influence of drugs or alcohol, they are able to ask you to take a DOT drug test. This will need to be based on observations, which could include a change to your appearance, smell, or speech.

·       Random testing – Every quarter, companies will complete random testing. Every employee has an equal chance of being selected and tested at any time.

·       Return-to-duty tests – If you violated drug and alcohol policies in the past, you won’t be able to start work as a trucker again without being tested. You can be tested up to six times within your first 12 months of working to ensure you aren’t relapsing. On top of that, you’ll also be subject to follow-up testing, which could take place for up to five years.

·       Testing after an accident – When a trucker has been involved in an accident, there are certain criteria set by the DOT in regards to testing. A drug test will need to take place within 32 hours when needed, whereas an alcohol test must occur within just eight hours of the accident.

What is the Long-Term Impact of DOT Testing on Truckers?

Now that you know the answer to the question of what is DOT drug testing, it’s time to discover the impact it could have on your career as a truck driver. The main concern for truckers is that they might fail this test if they are under the influence when driving. After finding drug and alcohol testing near me, you’ll need to be immediately removed from any job role that performs safety-sensitive tasks if you do fail your test. On top of that, you could lose your license or certification. This could have both a short-term and long-term impact on your job security, and you might not be able to drive again or work in the industry for many years. You’ll want to ensure you are aware of your employment agreement and company policy if you have any concerns about your job security following a failed DOT drug test.

After failing a test, you are required to see a Substance Abuse Professional (SAP). They will fully evaluate you, and then you’ll need to complete a course of treatment to help with your recovery following a failed drug test. After completion of their recommended course of treatment, you’ll then have a follow-up evaluation with the SAP. Before you return to your job, you’ll also need to have a negative test once again so that you can start work as a trucker. Following your return to work, expect to be regularly tested as part of the return-to-work policy so that your employer can ensure you remain fit to drive on the roads.

As you can see, one failed DOT drug test can have an impact on you for many years to come. The Clearinghouse will also have your failed test on record, so if you are searching for a new job following your treatment, potential employers may look upon this negatively. You can’t just try and get another job straight away, as this will be clear to any potential employer when they run a search on you during their pre-employment checks. The safety of everyone on the roads is of top priority for anyone in the industry, which is why DOT drug testing is so critical for employees and employers.

If you're searching for DOT Drug and Alcohol Testing support, Labworks USA has everything you need. Contact our team today for more information and to find drug and alcohol testing near me.