What Happens if You Fail a DOT Drug Test 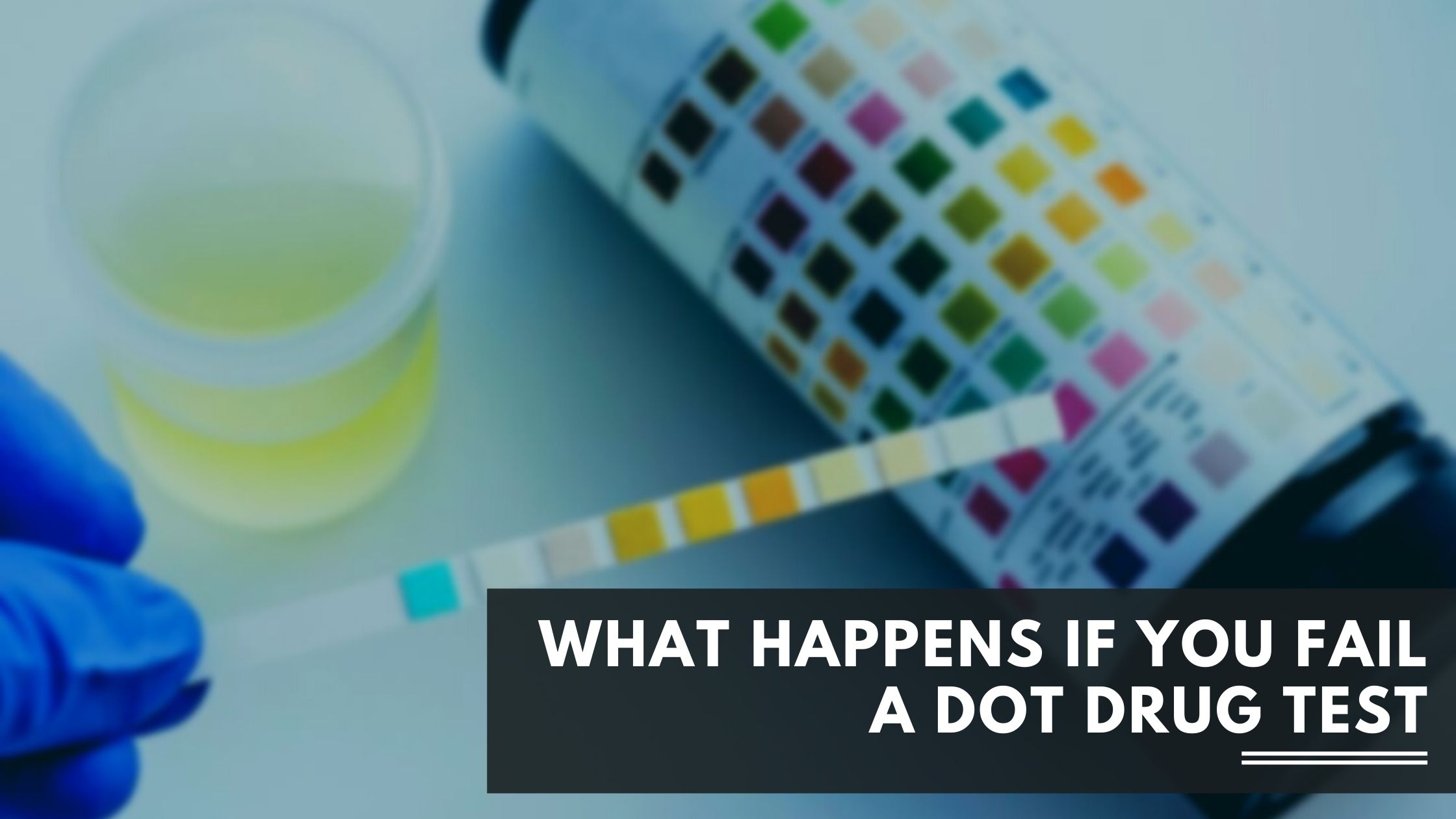 In the trucking industry, a failed Department of Transportation (DOT) drug test is no little thing. Commercial drivers perform many safety-sensitive duties, and even the smallest of errors caused by driving under the influence of drugs or alcohol can lead to serious accidents and consequences. For this reason, drivers are held to a higher standard in terms of drug and alcohol use. It’s clear why DOT drug tests are required and taken so seriously, but many drivers are left wondering what happens if you fail a DOT drug test. Read on to learn more about DOT drug testing and the results of a failed drug test.

What Is a DOT Drug Test?

DOT drug tests are drug tests required by the DOT for all Commercial Driver’s License (CDL) drivers and drivers who perform safety-sensitive functions. Drug tests are usually given in combination with alcohol tests and test for the following drugs:

To pass a drug and alcohol test and continue to perform safety-sensitive functions, drivers must not have any of these drugs in their samples and must have a blood alcohol concentration (BAC) of below 0.04. There are six types of DOT drug tests for which drivers should be prepared:

Failing any of these types of drug tests will result in disciplinary action for the driver.

Ways You Can Fail a Drug Test

Now that you have a better understanding of DOT drug testing, let’s talk about the ways in which you can fail a DOT drug test. All in all, there are two ways you can fail a drug test: either your sample tests positive for a restricted drug, or you refuse the drug test. There are a few specific exceptions to failure by refusal to test; for example, if you refuse a pre-employment drug test, you may not receive consequences, but the employer will not be able to hire you for any safety-sensitive tasks. Failing a drug test by testing positive or refusing to test will result in your immediate disqualification from performing any safety-sensitive procedures, including driving a commercial vehicle.

What If It Was a False Positive?

If you suspect that your positive drug test result was a mistake, don’t panic. Generally, the samples used in drug testing are divided into two for occasions such as these. After consulting with your Medical Review Officer (MRO), the physician responsible for reviewing the drug test results, you may request a retest within 72 hours of receiving the positive result. When you do so, the second, backup sample will be tested.

Consequences of Failing a Drug Test

If your drug test comes back positive, you’ll be subject to the consequences and disciplinary action. These include immediate removal from safety-sensitive duties, the required completion of the return-to-duty process, and the addition of your violation to your record.

As soon as a driver tests positive in any DOT drug or alcohol test, they must be removed from any safety-sensitive functions of their position. Often, drivers are concerned that a failed drug test will mean a suspended or revoked CDL license—this is not the case, but at the very least, drivers who have failed a drug test will be suspended from many of their duties. The severity of these consequences may vary based on the policies of a driver’s employer—certain employers or companies have a no-tolerance policy for drug and alcohol violations and may fire a driver for a violation, but not every driver with a violation is necessarily fired.

Regardless of an employer’s specific disciplinary action, a driver with a positive drug test must complete the DOT return-to-duty program before they are allowed to perform safety-specific functions again. This includes the completion of any prescribed education or treatment. The steps of the return-to-duty program are as follows.

Finally, it’s important to note that any and all failed drug tests, including refusals to test, will be added to your record in the FMCSA Clearinghouse’s database. These failed drug and alcohol tests will stay on record until your return-to-duty program has been completed and five years have passed since the violation. Employers are required to check the Clearinghouse database before hiring a new employee and regularly during the course of their employment. Is it already clear for you what happens if you fail CDL drug test?

The consequences of a drug or alcohol violation are serious and not to be taken lightly. Knowing what happens if you fail a DOT drug test will give you added incentive to avoid such consequences in your own driving career. One way to make sure you stay compliant with DOT drug and alcohol testing standards is by hiring the services of consortium third-party administrators to help you manage to test. Labworks USA will help you to stay DOT compliant and safe—and trust us, staying compliant as a truck driver or employer will only help you on your career path.