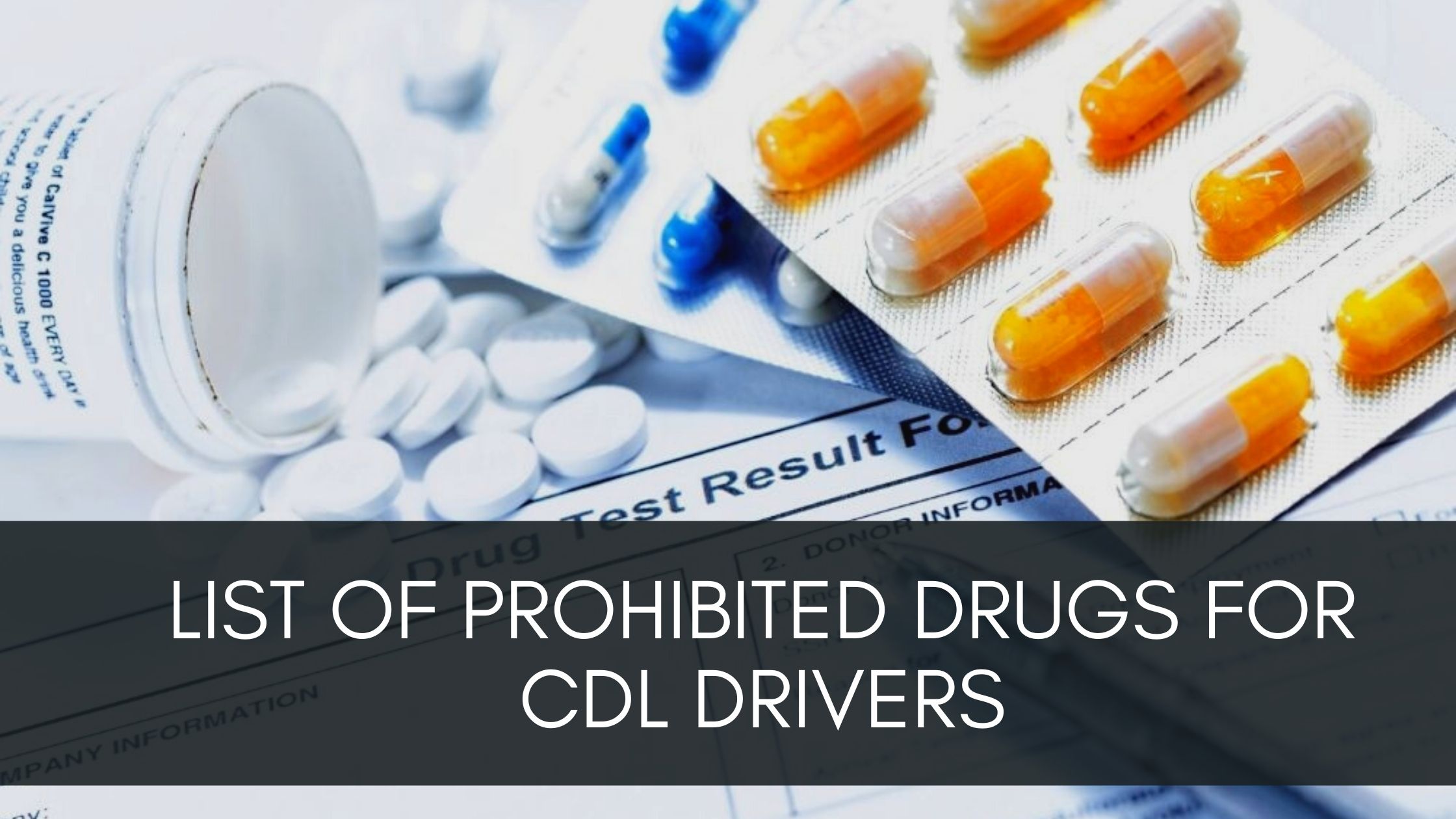 In the transportation industry, regulating drug use is particularly important. The Department of Transportation (DOT) prohibits the use of certain drugs and requires periodic drug and alcohol testing for all Commercial Driver’s License (CDL) drivers. This system of regulating the use of drugs and testing for drugs keeps truck drivers and others on the road safe. Since the use of certain drugs—even some that are legal—can disqualify an individual from being a CDL driver, it’s important to understand which substances are prohibited. Below, you’ll find a list of prohibited drugs for CDL drivers and some basic information about DOT drug testing for drivers.

A CDL driver must undergo an initial physical, including a drug test, before employment as well as occasional drug testing during the course of their career. The following drugs are considered disqualifying and are prohibited by the DOT:

In recent years, many states have legalized marijuana for medicinal or recreational use, but the DOT still considers it a disqualifying drug. This is because the effects of marijuana can create an unsafe environment on the road. Marijuana affects most parts of the brain and hinders many mental functions. Side effects of marijuana use include:

A driver needs to be alert, controlled and prepared to make split-second decisions while driving. Many of the functions that marijuana impairs seriously affect a driver’s ability to perform their job safely and responsibly.

Like many drugs, cocaine is addictive and has many negative side effects. The DOT also prohibits the use of cocaine. Cocaine use has the following effects:

Amphetamine is a central nervous stimulant that causes elevated levels of focus and confidence and that can cause euphoria. Amphetamines are often used in prescription medications that treat conditions such as ADHD and narcolepsy. Common brand-name amphetamines include Adderall, Dexedrine, and Vyvanse. However, amphetamines are often abused when used recreationally. Increased focus or confidence might not seem like a bad thing while you’re driving, but amphetamines can have other dangerous side effects, including:

In addition to these effects, amphetamines are addictive, making them even more dangerous. The illegal use of amphetamines is particularly tempting for truck drivers, as the increased focus and alertness the drugs cause make it easier for drivers to complete shipments more quickly. However, the detrimental effects these drugs can have on drivers far outweigh the positives.

Opioids are types of drugs that affect the opioid receptors in your cells. They are used to relieve pain, are present in many types of pain medication, and are highly addictive. Side effects of opioids include:

Drowsiness and confusion are two side effects that will seriously affect a driver’s ability to do their job, and they can lead to accidents on the road. For this reason, the DOT does not allow CDL drivers to use opioid medications, even those that are legal or prescribed.

Phencyclidine, also known as PCP or angel dust, is an illegal drug that has mind-altering qualities and that the DOT therefore prohibits. The use of phencyclidine can lead to the following side effects:

Phencyclidine is also an addictive drug, so when an individual starts using it, stopping is very difficult. A driver put into any of the above states by phencyclidine will quickly become a danger to themselves and others on the road.

The DOT requires that all drivers of commercial vehicles undergo a medical examination prior to employment as well as drug tests throughout their careers. At the pre-employment medical examination, a drug test will be administered to the driver, testing for any trace of the five prohibited types of drugs in the driver’s system. Drivers must disclose any medications they’re taking, prescribed or otherwise. If you’ll be taking a drug test during the pre-employment process, be sure to reference the above list of prohibited drugs for CDL drivers to ensure you’re not taking any drugs that fall into these categories. In certain situations, a medical professional may clear a driver to drive despite being prescribed a prohibited medication. The medical examiner will take this into account and determine the driver’s fitness to drive accordingly. In addition, CDL drivers must comply with DOT random drug testing requirements, and they may also need to be tested after they’re involved in accidents.

What Happens If a Drug Test Is Positive?

If a drug test comes back positive, the driver who was tested has the option of requesting a retest within 72 hours of receiving the test results. The same sample will then be retested to confirm the results, and if they still come back positive, disciplinary action will be taken. If a driver fails a drug test, it results in their immediate suspension. A Substance Abuse Professional (SAP) will then evaluate the driver and prescribe a treatment plan for the driver to complete. Once the driver has completed those requirements, they must pass a return-to-duty drug test, after which point they will be eligible to work once more. However, having a failed drug test on record can be detrimental to a driver’s career.

If you’re concerned about the technicalities of DOT drug testing, consortium third-party administrators such as Labworks USA can help you manage the required DOT drug and alcohol testing. Always remember to be responsible for your drug usage and to avoid any DOT prohibited drugs, especially when you’re on duty.