How To Handle a Failed DOT Drug Test 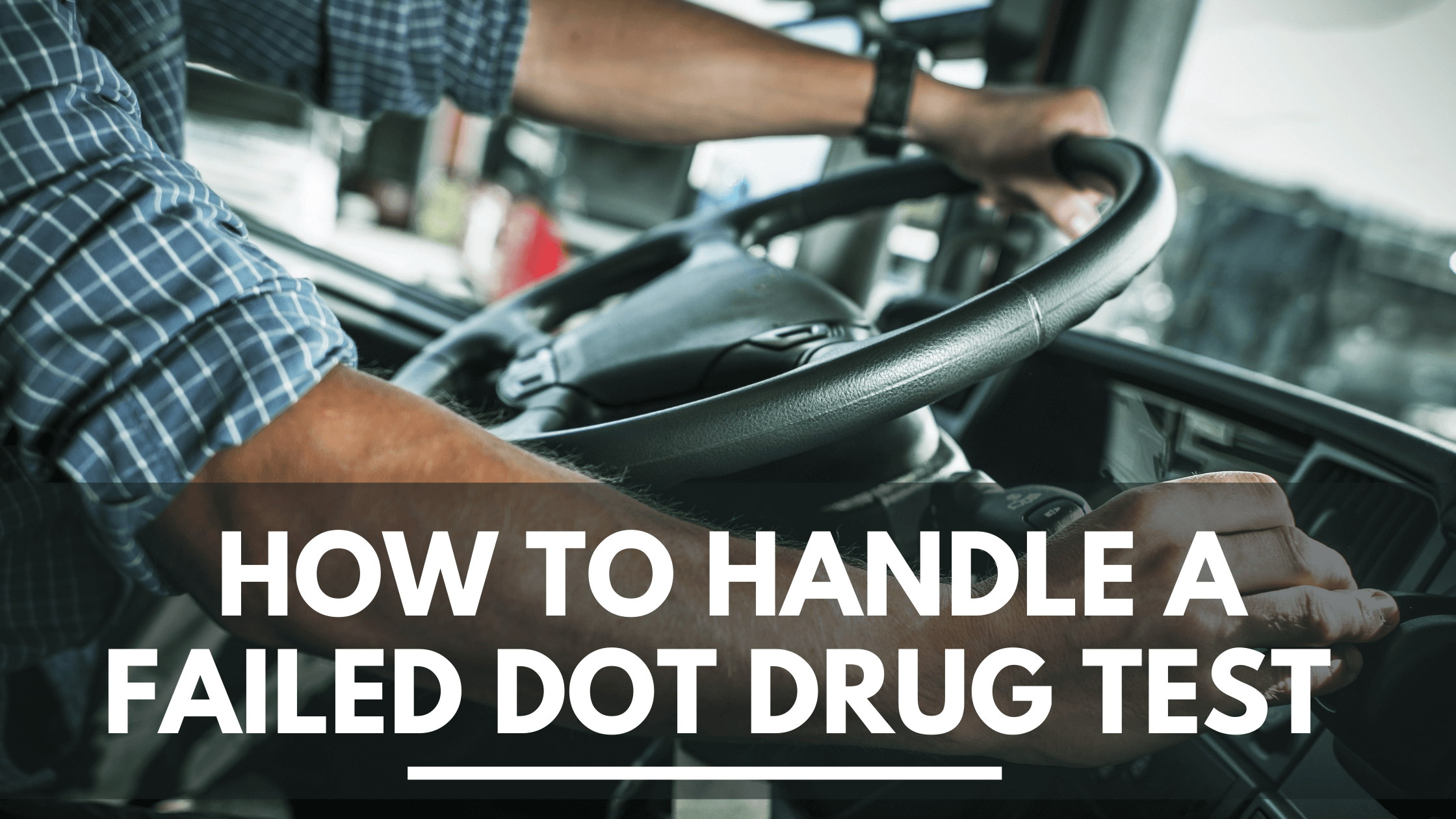 For many employers, it can be a stressful and confusing time when an employee tests positive on a DOT drug test or alcohol test. Does the employer now have to “DO” anything? Must the employee be fired? How long will the driver be out? Can the driver be re-hired? The key is to precisely follow the DOT regulations in order to handle the situation correctly and maintain regulatory compliance. So how are you going to handle a failed DOT drug test of your driver?

Here are some some key questions that might be going through you driver’s mind:

How Do I Return To Driving After Failing Or Refusing A DOT Drug Or Alcohol Test?

Your employer (or potential employer) will provide you with a list of nearby DOT-certified Substance Abuse Professionals (SAP's).

You, Will, be evaluated by the SAP.

The SAP will prescribe a course of treatment or education.

You must complete the entire return-to-duty process with the same SAP, and you will be responsible for paying for it.

Once treatment is completed, you will be required to pass another drug test.

You will be tested at least 6 times in the next 12 months, and up to a total of 60 months.

Failing another drug or alcohol test will require repeating the return-to-duty process.

What Is The DOT Return-To-Duty Process?

Be evaluated by a DOT-certified substance abuse professional (SAP).

Complete the recommended course of treatment or education, at your own cost.

Pass a follow-up drug and alcohol test, and submit to random testing for at least the next 12 months, up to 60 months.

Two of the most important rules of trucking are:

Protect that CDL license; and,

If you put yourself into a position to fail a DOT-required drug or alcohol test, you've clearly failed at the first and put yourself in danger of violating the second. So now what?

While the overall drug and alcohol test failure rate for CDL drivers nationwide is somewhere south of 1%, drivers do fail them, for a variety of reasons.

Why Do Truck drivers Fail Drug Or Alcohol Tests?

Among the reasons that a driver might fail a drug or alcohol test:

Recreational use at home.

Not having a valid prescription for drugs found in their system.

Taking prescription medication that will not be allowed under DOT guidelines (i.e. anti-seizure medication).

Not waiting long enough to clean up before being tested, especially in the case of hair follicle testing.

Drinking too close to their driving time.

Here's what happens if you fail a DOT drug or alcohol test:

You will immediately be removed from DOT-related safety-sensitive responsibilities, which for truck drivers means you will be put out-of-service, instantly. And almost certainly fired or turned down for the job you were testing for.

You will be allowed to work, but not in any safety-sensitive functions.

What is a substance abuse professional (SAP)?

A substance abuse professional, or SAP, is defined by the Department of Transportation as a person who evaluates employees who have violated DOT drug and alcohol testing regulations in order to make recommendations for the course of treatment or education, follow-up testing, and aftercare.

SAP's must be licensed physicians, social workers, psychologists, or otherwise licensed and certified therapists or counselors. Their duty is to protect the public interest and ensure that drivers who go through the return-to-duty process are fit to actually return.

Next You Will Be Professionally Evaluated And Treated:

You will be required to do the following before you are allowed to return to safety-sensitive duties:

Be evaluated by a DOT-qualified substance abuse professional (SAP). The SAP's responsibility is to protect the safety of the general public, through evaluation, treatment, and follow-up;

Complete whatever course of treatment, education, or counseling is directed by the SAP; and,

Test negative on a follow-up drug and alcohol test.

Even under Clearinghouse, truck drivers can fail a drug test yet remain behind the wheel

“There are situations where things could fall through the cracks,” said Tom Fulmer, vice president of National Drug Screening, a national provider of DOT drug tests.

DOT said that more than 8,000 records have been added to its CDL Drug and Alcohol Clearinghouse. . That means, as of Friday, more than 8,000 CDL holders have failed or refused a drug test (or committed an alcohol violation) as part of a pre-employment screening, random drug test or post-accident test in the last seven weeks.

Those who have failed a random drug test or a post-accident test have likely been sidelined but drivers who failed a pre-employment screening could still be employed and still be driving.

Will My Future Employer Know About It?

If you are wondering if your failed DOT test results will follow you to other employers, the answer is yes. Previous employers are bound by the law to furnish new employers with certain records of DOT drug-testing history. However, that should not worry you if you have successfully completed the return-to-duty program with the assistance of a qualified SAP provider.

The Consequences of a Failed Drug Test

An inconclusive test result means the test did not determine for certain if there were drugs in the urine. A failed drug test, on the other hand, means the urine tested positive for one or more of the drug panels included in the test. In many cases where the drug is illegal, or there is no medical reason for using it, employment may be terminated.

In addition, failing a DOT drug and alcohol test remains on your record for three years. While this may not seem very long, if you are terminated because of the drug test result, the termination remains on your record for even longer. This means that if you apply for other positions with different employers, they may be able to see that you were terminated. Thus, the consequences of failing a drug test can affect your employability for years, even though the actual record of a positive result goes away after three years.

Do you need support?

Contact Labworks USA to Help You Put Your Best Foot Forward After a Failed DOT Drug or Alcohol Test.

You can still get your career in the safety-sensitive transport sector back on track even after a failed DOT drug or alcohol test. To learn more about Labworks USA services and programs.